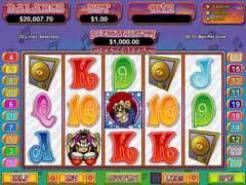 Play Now
There are a few monkey theme-based slots online today, but one of the more popular ones if Funky Monkey Slot Machine. It is a very colorful slot game which is a lot of fun to play. You’ll see notes in the background, which enhance this game quite a lot. In fact, this is more of a tribute to music than anything else, and the monkeys play an important role in bringing you such entertainment. In fact, they make up the band.

A 5-reel, 20-payline random progressive bonus video slot, Funky Monkey Slot Machine has coin sizes ranging from one cent to $5, with a max bet of $100. The smaller jackpot is 2000 coins. We advise you to read the pay table since it offers you all the information you need to win successfully in this game. There is also an Auto Play feature, so that you can leave the slot machine anytime if you need to take a break, or just stand up and dance to the music.

When the Funky symbol appears on reel 1 and the Monkey symbol appears on reel 5, you will trigger the bonus game. Here you will be taken to a second screen where you will select a monkey to play a tune. Now here’s where it get’s interesting. There is a Monkey Meter that registers the applause factor. This meter will award you up to 25 free spins. Both symbols will become additional substitutes that will count for all symbols during this round. There is also a multiplier that will kick in. It will start from 1xs and go up to 10xs.

Perhaps one of the most fun games to play (anything with music usually is), we invite you to play Funky Monkey slots at our recommended casinos .
Play Now