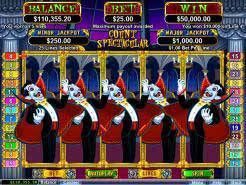 Play Now
Based on the version you may have seen or read about Dracula, we are happy to introduce Count Spectacular Slot Machine. This is a very lucrative slot, and one that we highly recommend due to the high value of this game. Plus the fact there are no card symbols, which makes for a much more interesting and unique slot to play.

A 5-reel, 25-payline bonus video slot, Count Spectacular has two jackpots: a Major and a Minor. But that’s just the tip of the iceberg because you can win $50,000 playing this game as well as 10,000 coins for a special symbol. It does include the Auto Play feature, which will definitely come in handy. As always, we recommend you read the pay table. This slot has 4 pages, and all are important to the game. The coin sizes range from one cent to $5, with a max bet of $25 per spin.

I Want to Drink Your Blood!

The real Dracula would have said something like this; however, in Count Spectacular you will find him a little more appealing sans the blood thing. Count Spectacular certainly has a lot going for him in this game. He is the Wild symbol and substitutes for all other symbols except the scatter. When the Count appears, he will expand to cover all positions on the reel. Get all five, and win 10,000 coins. More about him later…….. The scatter symbol is the Castle. Here, when it appears 3, 4, or 5 times anywhere on the reels, it will pay from 2 to 200xs your bet. The other symbols in this game include: a frightened woman, a wolf, a zombie, a coffin, a bat and carriage, a door knocker and garlic, and a lantern and mirror. Get all five of the frightened woman and you will win 2500 coins.

This feature is activated when Count Spectacular appears on reels 1 and 5. Here you will be able to choose 12 free spins with a triple payout or 4 re-spins. If you choose the re-spins, reels 1 and 5 will be held in place while the other reels re-spin 4 times. The 12 additional free spins are awarded if the Count appears on both reels 1 and 5 during the free spins round.

Considering the number of huge payouts in this game, we highly recommend you play Count Spectacular Slot Machine at our preferred casinos. No doubt, the price to pay for a chance to win multiplier jackpots, $50,000, and/or 10,000 coins should entice you to play this fabulous slot game .
Play Now